Tomorrow will be exciting but it will also be tough.  Tough to wake up and get it all done in time for school.  Luckily here are some quick and allergy friendly ideas from PositiveHealthWellness to get you and your kids excited to make lunch tomorrow and all the school days ahead.  Click the link at the bottom for a slide show of some great lunch options that are nut free. 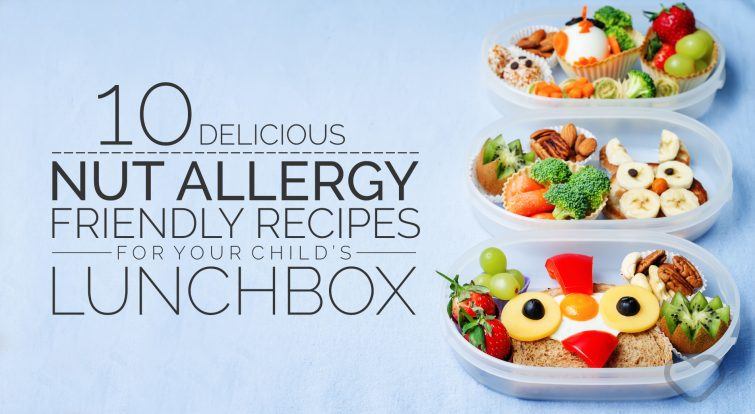 Finding child-friendly recipes for lunch that are exciting, delicious and nutritious can be difficult. But what if you throw a nut allergy into the equation? It can make it so much harder since nuts have always been considered the go-to for something quick and easy.

Don’t panic. You can put together the perfect menu for your child’s lunchbox. Their friends will be jealous, and you’ll have the mums and dads at school wondering what you do differently and asking you for your secrets.

All you need is a few recipe ideas to get you started. Here are 10 delicious recipes that are nut allergy friendly to try today. Many of these you can make with the kids and encourage them to try something new.

I’ve told you about my sister being a vegan.  Remember that Thanksgiving post a few years ago?  Yes, my sister ate bologna and McDonald’s as a child.  Which means there’s always hope and time to change your family’s diet, for health, political or any other reason.  She’s opened my eyes and tastebuds to lots of new ingredients, restaurants and recipes thru her diet.  And my family cooks and enjoys vegan meals quite frequently.  Recently I was given a few vegan cookbooks to review.  I thought it only right to give one to my sister, for a guest review.  Here’s her experience with some of the recipes she made from The Everything Vegan Cookbook by Jolinda Hackett…  (Thanks Christy!)

Nacho “Cheese” Dip which we put over nachos.  I really
liked it as it was a nice change from Daiya (“cheese”).  My husband was not as impressed as he felt it was not creamy enough and too doughy.
Lemon Basil and Articoke Pasta was another split decision
as I really liked it and my husband felt like the tomatoes over powered it (he
is not a tomato fan). I think less tomatoes and having them cook for longer
would have been better in keeping with the name of the dish.  Also very
important to use fresh herbs as I did not have fresh rosemary and the dry was
too woody.
Dairy-Free Ranch Dressing was a huge hit!  I have been looking for a good Vegan Ranch and this is it!  Used it for Mother’s Day and had guests (non-vegan)asking for the recipe.
Cookies and Cream Cheesecake is an interesting dessert.  Looked beautiful, has the consistency of non-vegan cheesecake but is very mild in flavor.  More flavorful with chocolate syrup drizzled and maybe should have added the crumbled cookies on top.  My 10 year old nephew, who is a very picky eater, liked it so that says a lot.
All and all I think this is a great cookbook as it has a lot of quick and easy recipes and I found that I had many of the ingredients already in my kitchen.  If one is considering Vegan-ism or maybe have a weekly Vegan menu these are good recipes.  Here are a couple sites to visit:  http://www.compassionatecooks.com/vegsheets.htm
http://thethinkingvegan.com/

This guest post is contributed by Shannon Wills, she writes on the topic of Physical Therapy Assistant Schools . She welcomes your comments at her email id: shannonwills23@gmail.com

The Best Foods for Your Child during Recovery from an Illness

It’s not an easy time when your child is ill or just recovering after an illness or disease. You’re stressed out from praying that their illness does not worsen and from caring for them when they’re down and out. But once your doctor certifies that your child is well on the way to recovery, you start to focus on how you can help speed up their journey to good health. Your child would have lost both strength and nutrition because of their illness, and your prime task is to ensure that they’re given the right kind of food to get them back to normal and fortify and strengthen their frail bodies.

Ask your doctor what you can and cannot feed your child because every illness has specific recovery rules. In general however, it’s best to:

If your child has special needs and has to avoid certain food groups, consult your doctor for the best post recovery foods.