This is a conflicted time for our family.  My daughter being a vegetarian and my sister and brother in law, the vegans, don’t want to think about turkeys being slaughtered for Thanksgiving.  My parents will have a turkey.  How the bird gets cooked and carved is for the carnivores in the family only.  In an effort to off-set the killing of many turkeys our family has decided to help save one.  Really it’s about donating money to help care for a turkey that has been rescued from a factory farm.  There are many such animals at Farm Sanctuary, a rescue in New York, Northern and Southern California.   A visit to the sanctuary in Los Angeles led to my daughter’s vegetarianism a few years back.  Where she learned “Animals are Friends, No Food”.

So my daughter choose this adorable turkey, named Martha to adopt.  When I told my family about the adoption campaign at the dinner table (we were eating something vegetarian) both my kids were excited.  My son, the carnivore, said he’d even pay the $30 fee.  My daughter was let down at first when she realized adopting the turkey meant in name only and it wasn’t coming to live with us as a pet.  Next, she had to think about putting her own money in to contribute to Martha’s care, which I said was the deal.  However she came around and there was a $5 per child share with mom and dad picking up the last $20.  It seemed fair.  My daughter was so excited that she called and told her grandmother who adopted another turkey, Minerva while they were on the phone together.  I wish my daughter would use those sales skills when it’s time to fundraise for her school.  She hasn’t put it together that her grandma rescued Minerva but will be buying another bird, a dead one to eat.

It seems quite exciting that Hanukah and Thanksgiving coincide this year.  It hasn’t happened until the early 1900’s.  t don’t know why but I think there are many twists that could be put on the holiday table to combine the meal. In the past when my family was all going to spend Thanksgiving together but miss Christmas together we combined the holidays into one and called it “Thankmas”.   So how about this new match up?   Thanksukah?  Hanugiving?

Chabad.org/Food and author Miriam Szokovski have some great recipes to combine the best of the Hanukah and Thanksgiving flavors and traditions.  Here’s one I’ll definitely be trying….Thanksukah or not.

Instead of sweet potato pie, try these sweet potato butternut squash latkes. You’ll get the flavors of Thanksgiving but the crispy fried texture of Chanukah. 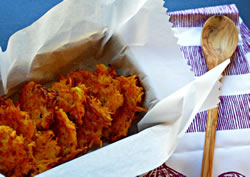 If you’re making your list and starting to plan for next week’s turkey dinner there’s a great website created by the Partnership for Food Education to help.  This resource has info on everything from how to choose, store and cook a turkey as well as some fun food prep activities for kids and yummy recipes to please everyone at your table.  Check it out here.

Once the planning and shopping is over and you’re ready to get into the kitchen here are a few things to remember in terms of home food safety for your holiday meal: Clean, Separate, Cook, and Chill.

We were invited to a First Annual Hillbilly Crabfeast.  I had no idea what this meant.  My husband was also asked to go out on his friend’s boat the day before the feast to drop the crab pots.  He apparently had been asked to please look up information online about dropping crab pots.  Well, he got wrapped up in Halloween and my son’s soccer play-offs and he never got the info.  Luckily when it was time to get on the boat there were some other more experienced friends to help.  He had a great time but also felt a bit of pressure.  30 people were coming for crab.  Would it be pizza if they didn’t catch anything?  His pressure was relieved when he learned it would  be the next day that the crab pots would be pulled up.  He couldn’t be there.  This was lucky because the day they dropped the pots was beautiful.  Apparently the next day to haul the catch was cold and windy.

My husband was happy to participate and even happier to hear the next day’s group not only found the place where he had helped drop the pots but there were actually 30 crabs in them.  Success!  The house for the party is under construction however the porch is finished and beautiful.  Thus the hillbilly aspect was that it was outside (and table was set with mason jars and old paint rags – a cute touch).  But after that there was nothing hillbilly about it.  In addition to the crab the hosts had created an outdoor paella pit.  Luckily another friend knew how to make paella for 25.  He’d never done it over an open flame but it all went very well once some logs were removed and the heat of the fire cooled a bit.

It was a really fun and tasty evening, where everyone pitched in to help with the meal.  Whether you were bringing in crabs, cooking bread, stirring paella, cutting lemons or holding the flashlight (it got dark) – it was a group effort to finally eat.  Many friends brought sides, desserts and wines too.  So there was plenty of everything.  Certainly everyone can’t dig a pit in their yard for paella but you can make it at home.  The makings, pan and spices came from The Spanish Table in Mill Valley (also locations in Berkeley, Santa Fe and Seattle).  This is a great resource for spanish cooking from wines and spices to pans and dishes.  Here’s an Easy Paella recipe from AllRecipes which was similar to the giant one made for the party.  I can’t wait to see what happens at the 2nd Annual…Thanks Marc and Meredith!